Despite the fact that my neighbours may never speak to us again, the kids got  Rock Band for the Xbox at the weekend, along with the drum kit, guitar and mic: 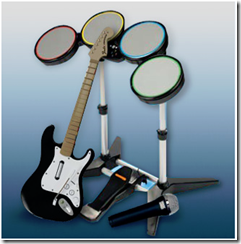 All I can say is that it’s awesome!  We (the adults) played it until 6:30am Sunday morning, and now have no

voices left.  The kids resumed a few hours later, and were much more serious than we were.  They managed to win a tour bus and a few thousand fans, and unlocked a few new tracks.  We had downloaded some extra tracks in the early hours, like the Buzzcocks “Ever Fallen In Love”, “Roxanne” by the Police, and other such classics which we then truly murdered.

If you’re a budding or wannabe Slash, Jon Bon Jovi or John Bonham, and haven’t quite managed to get that contract signed, then this game won’t help you at all.

But it is really tremendous fun.

(Note to self: everything in moderation…)

It’s going to get busy ’round here…

I have an X-Fi Elite Pro.  I know, I’m very lucky, but I got it because of the excellent sound quality.  I had hoped that the RTM drivers for Vista (and associated apps, EQ etc.) would have been available at the lastest yesterday or today, given the public launch of Vista.

No.  The following is an extract from a moderator posting on the Creative support forums:

Due to additional requirements in the Windows Vista driver certification process, the release of the final signed drivers for the Sound Blaster range will move out beyond our initial projected date until early March. The current Beta drivers are still valid for use under Vista and are required to take advantage of the benefits of Creative ALchemy with the Sound Blaster X-Fi range to restore multichannel audio and EAX to your games. We appreciate your understanding for this change to the schedule as we work to bring you the best experience for your Sound Blaster series cards while adhering to the requirements of this new operating system.

I have my cake, but I’d like to eat it please…

If this is true, I’ll be going down the Xbox 360 route thank you very much.

[Update: Sony has confirmed the higher price is for Ireland only, due to its higher VAT rate. The 60GB PS3 is still set at EUR 599 for the rest of Europe, GBP 425 for the UK.]

It seems that sleep reorganises your memory to allow better recall, in such things as remembering directions to a place. I suppose that you could see it as brain defragmentation…any chance this will be in Vista?

I love this. The head of Ubisoft’s excuse for the gameplay being too dark on traditional TVs, on which most players play consoles, is:

“I’m a bit disappointed that we didn’t see it when we were developing the game”.