Power Pack 2 will be made available via Windows Update.  Users need to have Windows Home Server with Power Pack 1 already installed on their home server. Power Pack 2 will automatically install as part of Windows Update if Automatic Updates is enabled on the home server.  (How to turn on automatic updates.)  The English version release date is March 24th.  Chinese, French, German, Japanese and Spanish is currently scheduled to be available before the end of April.”

Full details of the updates can be found here.

I got my new mobile phone this week.  It’s the HTC Touch Diamond…oh yes!  It’s beautiful.  It’s sleek.  It’s light.  It replaces the Nokia N95 I’ve had since last 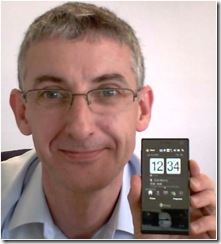 August.  The real reason I wanted a new Windows Mobile-based device is that we’re running a pilot project to integrate our Nortel CS1000 PBX with Microsoft Office Communication Server to give us full unified communications.  There’s a Communicator Mobile client app that runs on WM devices that connects to our OCS server in the office to give me presence and IM capabilities to all my corporate contacts.

Initial impressions are that it’s an excellent unit, although the battery life has yet to be determined under “normal” usage, as opposed to the incessant playing with that it’s currently getting.  I just can’t leave it alone.

As an iPhone alternative, it’s got a few things the iPhone doesn’t: MMS, video recording, and the ability to load any WM apps I want.  It’s also got a 3MP camera, as opposed to the 2MP one in the iPhone.

I’ll post more as I get used to it.

“The Release Candidate 1 (RC1) update to the Hyper-V role provides improvements to security, stability, performance, user experience, forward compatibility of configurations, and the programming model. All users of the Hyper-V role are encouraged to apply this upgrade. After you install this item, you may have to restart your computer. Once you have installed this item, it cannot be removed. This update is provided to you and licensed under the Windows Server 2008 License Terms.”

There is also an update to the Vista Management console for RC1 available here.

Over the years (quite a number in my case), I have purchased a large number of Creative sound cards.  Generally, I went for the higher spec ones (AWE64 Gold with extra sugar, etc).  My last purchase was in January 2007 of an X-Fi Elite Pro.  Not a particularly cheap purchase, you’ll admit, at €360.

Shortly after that, I started testing Microsoft Windows Vista, and was pretty impressed except for the lack audio driver support.  I had to accept the statement from Creative that as Vista had not officially launched, they would not provide support it.  Fair enough, you say.  Once Vista launched though, I wanted my drivers.  I still want them.  Doesn’t look like I’ll get them from Creative though, and now it seems that Creative want to make sure that I don’t get them from anywhere else.

Daniel_K is a regular in the Creative support forums who has taken it upon himself to develop drivers which Creative can’t/won’t release.  He has helped a lot of people to get Creative hardware working on Vista, but now Creative want him to stop.

Creative have, in a thinly veiled threat, told him to cease and desist, or else…don’t-touch-my-IP-or-I’ll-break-your-legs-cuz-you’re-stopping-us-forcing-people-to-buy-new-cards type of thing.

You can read it all here (currently with 1,714 replies…and heading for a quarter of a million views), but suffice to say, I personally will never buy nor recommend that anyone else buys, Creative hardware, as they just want you to junk whatever you have and buy another piece of their unsupported kit.

Yesterday, I ordered a 16Gb iPhone, probably a gut-reaction to the O2 announcement that they’ll provide them from March 14th.  I grappled overnight with the thoughts of having to live without Exchange push e-mail, and no 3G.  I heard this morning that visual voicemail also won’t be supported.  Now I hear that the iPhone isn’t supported on 64-bit Vista.  We’re just about to roll out that OS flavour to all our desktops, so we’ll just throw that order in the bin.

Maybe later in the year when the 2nd gen iPhone supports 3G and other stuff, and the price is dropped and the extortionate packages and terrible conditions disappear, I’ll look at it again.

Or maybe not.  I’ve had a Nokia N95 now for nearly 6 months, and my biggest (only) gripe is it just a little too big and heavy.  That apart, it does everything I could possibly want.

If you want 5Gb of free online storage, look at Windows Live SkyDrive from Microsoft, part of their Live initiative.

All you need is a Windows Live ID account, and you can store private files of any type, or choose files to share with friends and family.

It’s my virtual USB key of utilities.  Good price too.

According to the WHS blog, the first post-RTM system update will be available via Windows Update next Tuesday, November 27th.

The blog says that “…the main benefit of the update is that it will improve the remote access experience for Windows Home Server users by providing them with a ‘trusted SSL certificate’ for their home servers. That means customers will be able to access their home server from outside the home more seamlessly, without any security warnings.”

Full details of the update are available on the Microsoft support web site here.